When you come across a band with the name VACATIONS, your mind will likely drift off into that ethereal paradise of halcyon days before you actually remember to hit PLAY.

If you’ve made it this far, do yourself a favor and remember to hit play. Hailing from Newcastle, Australia, the 21-year-old jazz musician – Campbell Burns –could very well be Mac DeMarco’s younger brother, but his sunny Australian roots place him in another plane of catchy riffs and simple lyrics. 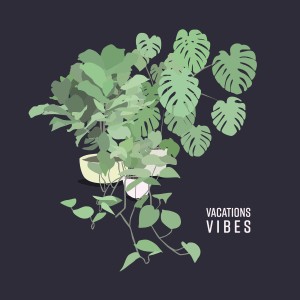 VACATIONS emerged on the scene in September of 2015 with a five-track release entitled DAYS. Here you catch the drift of where this band is heading – with more nods to Real Estate than Mac; yet it becomes clear midway through that they’re still developing their sound and finding their mojo. Where the songwriting seems naïve or vague, the sun-beaten melodies and the lead guitar’s “no-fi” flang make up for whatever seems to lack. The jangly guitar solo in “Moments” and the high-energy rhythm of “No Fun” – where the lyrics and vox harmonize at their best – gives credence to the promising potential of this group.

VIBES, released the following December, is an irrefutable ascension from DAYS – where their previous album lacked in cohesion and development, this album makes up for it two-fold. They found their mojo. The lyrics evoke a conscious naiveté without sounding naïve. The twenty-two second, sun-dappled intro of “Home” opens up the album like any start of an easy-does-it surf rock ballad. One may nod at the similarities between “Home” and Mac DeMarco’s “Cooking Up Something Good” both of which share themes of lackluster ennui underlining the untroubled freedom we experience during our youth.

The sun-kissed rhythm guitar ups the ante in the second track, “Away”, providing the perfect balance of upbeat yet laid-back oomph …the kind of song you don’t mind getting stuck in your car’s old tape deck […windows down, driving towards the horizon, with no direction or worries, “gotta get away” is the natural antidote of being homebound for too long – something he insinuates in his opening track.] Then “Relax” comes on with that twangly-jangly-jittery-jivey-beachy-vibe-y guitar riff and suave drumbeat, and you just know it’s gonna be a good day. [He takes a common interaction between the quintessential high-strung figure and the cool and easy one – the mother and son, the girlfriend and boyfriend, the self and the ego – giving it a smile-and-nod melody and a no-frills, happy-go-lucky harmony.] The message here is the opposite of Frankie goes to Hollywood: Relax – do it. And keep this song on until it ends.

The blurry moments of morning youth are embodied in the following track as Campbell’s woozy voice soliloquizes against a toned-down version of their signature melody. [Here you find yourself lying on the couch of a friend, a lover or maybe a stranger you just met; you’re in a deranged, dehydrated, likely hung-over mindset…whether from depression or sorrow or some form of regret, and nothing you say makes any sense.] Then the best part of the album happens: like the impetus to jump out of your wallowed state and dance: entitled, “DAVE BRUBECK”. It is the instrumental track we’ve all been craving.

When you’re happy; when you’re sad; when you’re pissed; when you’re mad; being kooky; playing hooky, eating a cookie; making love or making breakfast; late for work; early for the dentist; on the road or on the phone; in a rush or in the zone – it’s the jingle rock of post-jazz jangle garage pop…with the perfect spectrum of energetic blitzes and moshing swishes. Everything is going to be okay. The title is perfect, by the way.

The album could have ended at this point, but “Friends” closes the record in greater symmetry with the opening track – solidifying their sense of cohesion and development. While the lyrics are simple, they speak to the majority of happysad youth – many of whom have yet to inherit the reigns of responsibility. Nevertheless, VACATIONS exhibits an easy-going ambivalence that most people can empathize with, whether you’ve lived by the beach or not. And lucky for us, Human Sounds Records have released a marriage of VIBES & DAYS on tape so that we can indulge on these sonic delights all at once.